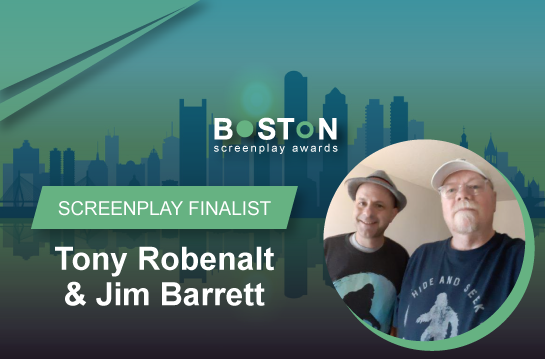 My name is Tony Robenalt. I was born in San Mateo, California and currently reside in Carson City, Nevada. My copious list of hobbies includes playing pool, hiking, devouring books and movies by the boatload, being a cigar and craft beer aficionado, meditative exploration, and lots, lots more.

My name is Jim Barrett. I was born and raised in Pittsburgh, PA.  I currently live in Dayton, NV. My hobbies are riding motorcycles, both street and trail bikes.  I love watching movies and reading screenplays. I also like to dabble in Karaoke.

The concept started as just an idea about Bigfoot, but evolved into a story involving people’s perceptions, prejudices, and paranoia. We are still working on making the story better even now, so we’ve worked on this project for about a year now.

Tony: My process varies from script to script, but it generally involves a lot of brainstorming, outlining, character work, research, movie-watching, and visualization.

Jim: I concur with Tony on this process. We work together as partners, so we are on the same page in our development procedure.

Tony: I realized I wanted to be a screenwriter when I was eleven and watched The Exorcist for the first time. Knowing nothing about the process or format of screenwriting, I wrote a bunch of short stories over the next few years that were, in reality, synopses and treatments for horror movies I’d love to see.

Jim: Oddly enough, I started out as an author. I’ve written three fiction books. I met Tony when I moved to Nevada and he became my editor on two of my books. We work well together and made the move to write together on screenplays and we now have four finished screenplays together.

Tony: Again, far too many to name, and my influences have changed quite a bit over the years. As far as screenwriters go, my inspirations range from Ingmar Bergman to Frank Darabont to Rod Serling to Dan Gilroy to… again, way too many to name. Specifically, though, I love the way Darabont and Gilroy make the movie they want you to see pop to life on the page: Darabont through deft, rhythmic prose and Gilroy through his poetic manipulation of format.

Jim: I enjoy M. Knight Shyamalan and Quentin Tarantino films. I think they both go against the mold in their stories, and I like that. Not everything has to be a certain structure in creative art.

Tony: The Exorcist showed me how something only two hours long could get under your skin in a life-changing way. I was obsessed with that movie for years (and have watched it dozens and dozens of times; I’ve also read the book numerous times).

Jim: Ozark. The whole show is like a bad train wreck, and I can’t look away. I don’t see certain things coming in that show. There are no real protagonists. Everyone is bad in their own way.

Tony: Parasite winning both Best Foreign Language film and Best Movie at the Oscars. Full stop. It was a historic, inspirational moment that honored a truly brilliant filmmaker. (My favorite of Bong Joon-ho’s films is Mother.)

Jim: I don’t really have a favorite moment in cinema history, but I like that nothing is really taboo like it was in the beginning days in film.

Tony: As of this sentence, it’s a five-way tie between Fast Eddie Felson (partly because I’m a serious pool player, partly because he’s such a memorable “loser-winner”), Travis Bickle (a staggering portrayal of loneliness), Wendy (from Wendy and Lucy; she’s a fantastic, modern update of Umberto D., also one of my favorite movie characters), Jack Torrance (for reasons too numerous to list), and Justine (from Melancholia; her transformation is a thing of beauty).

Jim: My favorite character would have to be Randle McMurphy in One Flew Over the Cuckoo’s Nest. I love an underdog and Jack Nicholson was perfect for that part. It’s one of my all-time favorite movies.

Tony: Siddhartha Gautama, and I’d ask him what my real self is.

Jim: Jesus. Not sure what I would ask him. I’d probably just be in awe of his presence.