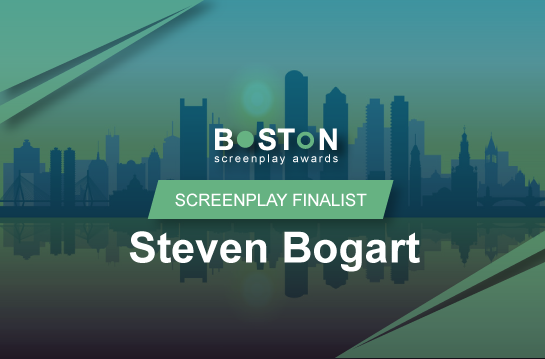 Steven Bogart. I was born in Brooklyn, NY. I live in Maynard, MA. I love running in the woods.

The concept came from a theatre piece I devised and directed over twenty years ago. From concept to finished draft, can you take us through your screenwriting process? This story went through many iterations, from a 40-minute stage play, to a two hour feature, at least ten rewrites over the years. Last year, I decided to turn it into a television series where it has gone through major changes. This has allowed me to fill out ang into more detail around the characters’ lives.

For many years I was devising and writing stage plays, but one day I thought of a story that I thought would be a fun challenge to write as a feature screenplay.

My movie and TV obsessions change. The first movie I was obsessed with a French film, Children of Paradise. After that I was obsessed with Fellini’s Eight and a Half for a while, and recently, The Quiet Place. As far for TV shows, The Mandalorian, Killing Eve, Invasion, and The Kominsky Method. But there are so many good ones.

This a challenging question. I loved the back story on the making of Children of Paradise because the actors and crew were in the French resistance fighting against the Nazi’s in occupied France and they never knew who would show up to work on the film. I thought the influence of Luis Buñel on cinema was huge and I’m grateful for how his iconoclast approach to filmmaking opened so many doors for future filmmakers and writers.

I’m not sure I can pin this down to one character. But to name a few, McMurphy from One Flew Over the Cuckoo’s Nest because of his deep sense of “f*** you” justice. Hans Landa from Inglorious Bastards because of his frightening polite cruelty, Sméagal from the Lord of the Rings because of his manipulative persistence, and Sarah Connor from the Terminator because of her strength and life and death determination.

I’d love to talk to Alejandro Jodorowsky. I know he’s still alive, but I’m really interested in the process he goes through to develop his scripts.