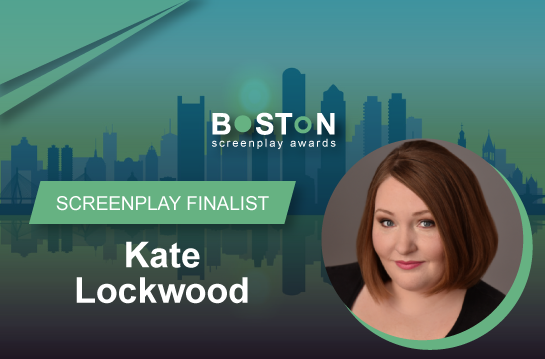 My name is Kate Lockwood. I was born and raised in Philadelphia, PA, and after bouncing around for awhile to different states, I finally ended up here in Los Angeles. When I’m not in writing mode, I love watching movies and playing video games – I’m a sucker for a story!

I stumbled across Giulia Tofana’s story randomly online during the pandemic. My first thoughts were “This is an incredible story” and “Let me find the movie about it.” I was shocked to discover that not only had nothing been made about her, but also it was not a well known story in the first place! I was hooked. I knew it needed to be on the screen. So, I decided to write it!

The screenplay was the most laborious project I’ve worked on to date, mainly due to the research. I wanted it to be as authentic to the time as I could make it, while still being relevant and exciting to modern audiences. All in all, it took about 8 months, 3 different drafts, and a lot of blood, sweats, and tears.

Sure! First of all, research was key. I spent a solid month researching Giulia Tofana, Rome, and the 17th Century before I even began to think about the story. After that, I focused on the characters. My work is very character driven, and the characters are my way into the story. Discovering who they are, what the want, and their relationship to others helped to fill in the connective tissue of the story I wanted to tell.

From there, things fell into place. When you know what a character wants in a scene, what needs to happen thematically, and the overall structure, it’s almost like the characters guide the events. They’re the ones that bring the story, and I’m just translating it to the page.

Quite late! I started off as an actor, but as most actor-turned-writers, I had the idea to write something for myself to act in. Those first projects were not very good, but I discovered my passion for writing. Over time I found myself auditioning less and less and writing more and more. Today, I consider myself a full time screenwriter.

My current idol is Phoebe Waller-Bridge. Although we have different styles, I think her ability to create complex and fascinating characters is incredible. Her smart style of storytelling, her twists and turns, and her rich character arcs are all things I aspire to achieve in my own work.

Too many to count! It’s so hard to pick just one, but at the moment, I’d say Killing Eve. It’s raw, edge-of-your-seat captivating. The cat-and-mouse game between the characters is so thrilling you can’t look away!

Oh dear, another hard one to pin down! Currently, I would say the piano scene for the film Stoker. It’s incredible. No spoilers, but in this scene, two characters are playing a duet on a piano. Director Park Chan-Wook is able to convey a huge shift in their relationship without a single word, just through the music and how the actors react to each other. Amazing.

At the moment, I’d say Yennefer from The Witcher series. She’s a deeply flawed, chaotic character, but also fierce and breathtaking. I love strong female characters, and there’s something so human about Yennefer and her journey.

Would it be too obvious to say Giulia Tofana? I’ve learned her story, imagined it from her point of view, but now, I want to know how her life really happened, from her perspective. And also…maybe learn her recipe for her famous poison, Aqua Tofana. What can I say? I’ve got a curious mind.