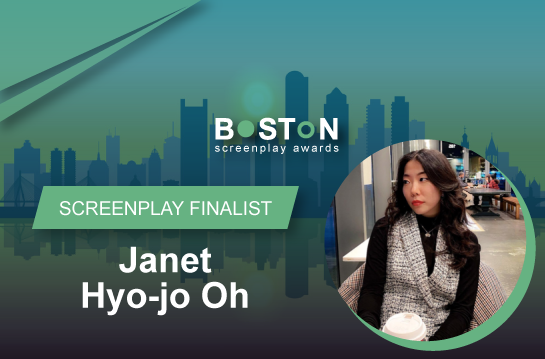 My name is Janet Hyo-jo Oh. Born in South Carolina, I live in NJ/NYC. My hobby is trying new things that are self-care-related. Currently, I am following baking recipes while imagining myself on The Great British Bake Off.

I was most likely in my room, working remotely when I got a rejection email from the Sundance Episodic Program for a script that was a lot bleaker than the one I had submitted for this contest. As I scrolled through the ones that got accepted, it hit me how original and unusual each one was, and I had to ask myself, “do I have something that makes me weird?” The answer honestly didn’t take long. And as soon as I began to embrace the things I actually enjoyed watching, the rest of the concept magically flooded, taking me about two to three months to develop it and write out the first draft.

There’s a bit of madness involved, to be quite honest. I don’t recommend my process to other writers because I’m still finding a healthier routine, but what has mainly kept me consistently positive about this pilot was the great possibility that people may actually like what I want to share with them.

So it was vital to stay pumped throughout the whole process and take necessary breaks in between. This helped me begin with conceiving multiple drafts of my logline, then world-building, a deep dive on each character, and a ton of questions from myself to me.

Doing all of this preparation emotionally helped me get through the outlining and actual writing process for this pilot. The finished draft isn’t entirely perfect, but a lot of fun and love went into it, which is important in any work that you create. And I look forward to writing the next draft with the new clarity and wisdom I gained since I briefly set it aside.

Growing up, I dreamt of becoming a Disney Channel actress and starring in my own TV show. My family and peers found this very unrealistic. I didn’t. So, I put all my youthful energy into getting involved in school musicals and practicing lines on my own from scripts I found online. Eventually, I realized my excitement never came from my desire to be in the spotlight. It was my deep appreciation for the unique storytelling and words that captivated not just my mind but others as well.

What connects these three are their unbelievably imaginative storylines and their deep insights/questions about humanity. Of course, they write a lot of good fun and drama, but what I see and love is their dedicated efforts in writing unforgettable lines that serve to encourage viewers to do some introspection and possibly make positive changes in their lives.

I have a few obsessive favorites. The one that beats out the rest is Doctor Who.

I was fourteen years old when I saw my first episode in a summer filmmaking class. I had no idea what was going on, but I enjoyed feeling confused because it was such an odd show, zany and a bit disturbing like a Twilight Zone episode.

Then, this young blonde female character (Rose Tyler) gave this emotional and passionate speech about what she learned from her friend called the Doctor that “you don’t just give up. You don’t just let things happen. You make a stand! You say no! You have the guts to do what’s right even when everyone else just runs away.”

And that’s when I knew I was going to love this show forever, which I’m still very happy with to this day.

My favorite moment is in Hayao Miyazaki’s Spirited Away when 10-year-old Chihiro has to separate from Haku whom she developed a close bond with after overcoming the final test to go back home.

I witnessed both characters’ growth throughout the film. How they relied on one another to find their own strengths and stand up to the people who made them feel powerless. It was a beautiful connection, but as it is in life, they have to go on their own journey and continue their self-growth.

Maybe they’ll cross paths again in the future. I hope they do. If not, they can rely on their shared memories to regain their strengths if and whenever they feel lost.

There are so many characters in cinema history who have touched my heart in different ways, but the only one I can think of now is Stitch from Lilo & Stitch.

He was born a hateful and destructive sentient being. But through his connection with a troubled human girl, he saw the external love and support she received and decided life would be better if he just asked for the same, thereby changing the course of his character and purpose. Also, he’s such an adorable creature and is always hilarious.

I am currently fascinated with Empress Myeongseong, the queen to the 26th king of Joseon (Korea). She married into royalty at a young age and used that privilege to thoroughly educate herself on all necessary subjects. Though she appeared unassuming at the start, she showed others how self-assured and ambitious she was in forging a new, hopeful path for the future of Korea. Unfortunately, her self-empowerment attracted dangerous enemies in her court and nearby countries, leading to her brutal assassination by Japanese officers at age 43.

My question for her would be: under all that immense pressure and fear, how did you maintain your composure, integrity, and focus?