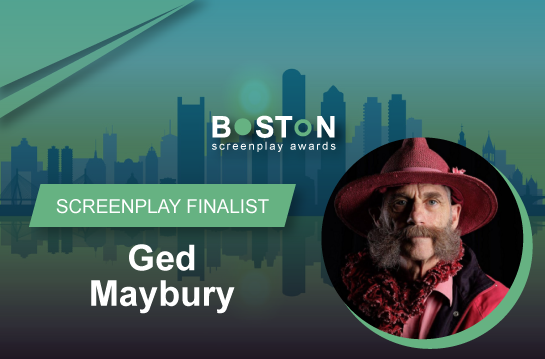 Hi, I’m Ged Maybury – the only one in the world. I’m 69. Born in Christchurch, New Zealand, into a working-class family of mostly British ancestry. No books in the house, no records .. I learned to read comics! After that I excelled in the sciences, failed at being an adult, and ended up as a successful Sci-fi writer for kids.

“Goodbye Ted” is based on a real couple. I was working in a BBQ restaurant and this big party of electricians came in one night. There was this arsehole guy with his tiny Asian wife – he sent her to do his cooking, then berated her for messing up. Time and again. She was terrified and we all felt sick but it was the 80s. No-one challenged it.

I’ve met other couples with a similar dynamic. Always the defective man and his brow- beaten ‘mail-order bride’. I wanted to free them all. Hence the script. Then reality hit: It would not be that easy for those women. PTSD is a real and haunting thing.

The idea started as a feature-length treatment .. then I shrank it to its essentials. I started with the singular idea: “There: he’s dead; now you’re free!” and let my story-instincts take over. The idea that came up was that old classic line: “Ashes to ashes; dust to dust.” That shaped everything from that moment on. What does she do with his ashes..?

How will that express her entire marriage, and her feelings, and her spirit?

First submitted to a local screenplay development program in Brisbane – it immediately won a place! My ‘prize’ was two sessions with an industry professional. It got polished, but did not reach the production slate. Two years later it won again! Rinse-and-repeat: it went un-produced. Around about 20015 an Asian film-maker in NZ (friend-of-a-daughter) took out an option and I tightened it once more. We discussed an issue -so I added one tiny final scene. But she didn’t win her funding application .. and it once again fell into limbo.

I’ve long been a playwright – since 1979. An actor too, children’s and adult shows. By 2005 I was an internationally successful sci-fi writer so it was a small step to converting one of my latest books-in-progress into a screenplay – purely as an exercise! From that I bounced back to the book-draft and did a massive revision -which bounced back to the screenplay, etc: 8 times! I highly recommend this practice! [That book is “Edgetown” BTW – now out on digital platforms.] The process taught me that I could write for the screen, and I began building other projects. I think very visually and hope to break into film eventually.

I’ve no idea. Screenplay writing simply seeped into me by osmosis. (Perhaps, one day, I’ll spot the source of my particular style.)

“Millennium Actress” by Satoshi Kon. Why? I guess because he had a mastery over the multiple layers of reality that go into any story – especially in cinema. But best of all he would play with those layers so freely – achieving an extraordinary ride that tears holes in my intellect every time. And my emotions too!

I’d have to say my first viewing of “Star Wars” But hey: I was massively stoned at the time.

‘Catbus’ in “My Neighbor Totoro” – mainly because of my reaction at the time. When it appeared on-screen, I squealed in total delight.

That would be Richard Pearse – the first person to successfully take off and fly a powered airplane (and who later dismissed his achievement – feeling that he had not achieved ‘controlled’ flight). I would meet him in 1902 and ask him (beg him!) to allow me to document and film his aircraft attempts. (And I really must finish my book about him!)