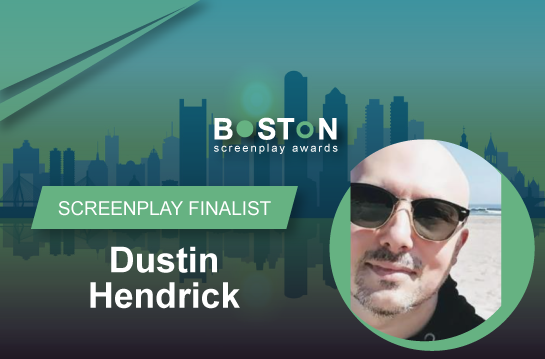 My name is Dustin Hendrick. I was born in southern Oregon and I currently live in Portland, Oregon. I’ve spent my entire life up and down the west coast. My hobbies include writing, reading, cooking, telling my cat to “leave it alone,” and arguing with my husband about what to watch on television.

The concept stems from my own childhood. I was raised by my grandparents. My mother was absent for most of my early years and I never knew why until she finally told me when I was in my thirties. So in a way I’ve been writing it all my life.

The screenplay is actually an adaptation of my short story of the same name. It was my husband’s idea to adapt it. It’s a fairly small script, but I took my time with it, feeling out each scene as I went to ensure the right tone. Including revisions it was about ten months from start to finish.

I write screenplays mostly with my husband. He’s a film school graduate and a production designer, meaning that he has an understanding of scene and process that I don’t (at least not yet!)

Most of my potential script ideas are usually just tiny concept grains that I throw at my husband. Between the two of us it can take several months of discussing and brainstorming before it becomes something writeable. I like to have a solid roadmap before I get started.

When I finally get to the writing phase I try to work on it every day, even if it’s just a small amount: reworking a few lines, changing the order of scenes, anything I can do to keep the creative fire alive in my mind until it’s finished.

That being said, I do think it’s okay to step away (briefly) if it’s just not happening. I do that too.

I’m the latest late bloomer ever, and this is definitely the case with screenwriting. I’ve always been a prose writer, since I was in single digits, but it was only after getting married to someone who was already working in the industry (I was 38 when we got married, I’m 44 now) that I realized I had something to contribute as well.

There’s so many. Right now it’s Jonas Matzow Gulbrandsen and Robert Eggers. I love their sparse, tense style. I love how they give a sense of life to the environment in their films – the forest, the ocean, they almost feel like characters. I like films and stories that take you to the empty and lonely places in the world, and these are two filmmakers who are masters of that.

The first one that springs to mind is Alejandro Amenabar’s The Others. I’ve been in love with that movie for twenty years. It’s a delicate, eerie, perfectly enclosed ghost story. The acting and cinematography is superb. It’s this strange, perfect blend of claustrophobic and grandiose and touching and creepy. I can watch it over and over.

Another is Fargo. Just a perfect film.

The Dunkirk scene from Atonement (a magnificent film based on a magnificent book.) A single long, incredible take that perfectly captures the moment.

Dracula, in his multitude of cinematic reincarnations.

Or maybe Mrs. Peacock from Clue, for obvious reasons.

James Baldwin. I don’t know exactly what I’d ask. I’d have a comprehensive list and probably not get through it all before he asked me to stop talking.

Cleopatra. She knew how to throw a party, and I want to know if it was really an asp.