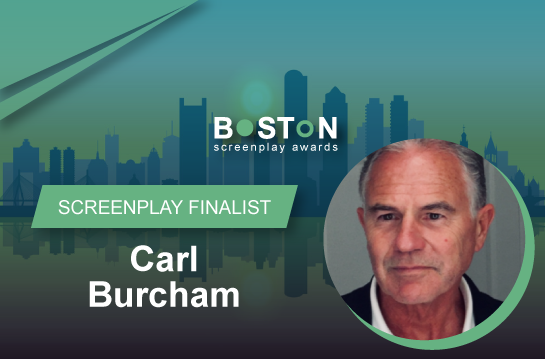 Carl Burcham. Born in Springfield, Ohio. Split my time between Austin, TX, and San Diego, CA. Screenwriting and golf are my hobbies.

Where did you come up with the concept that just placed as Finalist in the screenplay contest? How long did it take you to develop it into the screenplay?

I’d recently read several of the first books written by freed slaves, Clotel (or The President’s Daughter (1853), The Trial of Celia, A Slave (1855), and Running a Thousand Miles for Freedom (1848). The last book is the true story of how a quadroon woman disguised as a white slave master and her darker-skinned husband posed as a servant to escape to freedom aboard ships, trains and on foot. I thought, what an incredible story! But what if it occurred in a dystopian future where the anti-bellum south has once again become the norm? That imagining formed the basis for my script, Unchained Melodee. I completed it in three months.

From concept to finished draft, take us through your screenwriting process.

Sure. I recently completed the UCLA TV Writing program, so I use the process the school recommends. In this order: Logline, Pitch, Synopsis, Beat Sheet, Treatment, Character Studies, Scriptment (termed by James Cameron) or Step/Story Outline, then—and only then—Script. Then, rewrite, rewrite, rewrite.

Throughout my professional career, I’ve relied on words and pictures. I’ve written novels, non-fiction books, comics, speeches, advertising, etc. But I just completed my first screenplay last year at the ripe old age of 65. Since then, I’ve written six others.

Gosh, so many! I love the CODA screenplay by Siân Heder, League of Their Own by Lowell Ganz & Babaloo Mandel, Fried Green Tomatoes by Jon Avnet, tick, tick…Boom by Steven Levinson and any Hitchcock script or one written by Aaron Sorkin. The style I borrow is conflict, conflict, conflict.

Well, I’ve seen The Godfather seven times (brilliant script and movie). And, for TV, I loved Money Heist and The Squid Game because they were fun, visually brilliant (which only happens if the screenplay is written that way) and there are scenes and stories I’ve never seen before. (You can only watch so many romcoms with that same story over and over!)

Again, so many, so little time! Certainly, one of the best is Sophie’s Choice when the Nazi leader says she can only take one child. And she says, I can’t choose. What an emotional moment.

For a male character it’s a tie with Forest Gump and James Bond (only Sean Connery though!) and for female it’s Amelie. They are all such strong, well-written and well-acted characters who you just cannot stop watching! Made possible by great writing!

If you could talk to anyone from any era, who’d it be and what would you ask?

I’m sure glad I’m not being graded on these questions! Again, so many. But the first person who comes to mind is Abraham Lincoln. After providing him with a history book covering 1865 to today, I’d ask what he thought would be different had he not been assassinated.